Sometimes it is the confluence of two separate, and seemingly unrelated,things or events that produce the most interesting results.

The two things that I am talking about today are the upcoming release of another Star Wars movie and me reading last Sunday’s Terre Haute (That’s French for, “May the Force be with you at Walmart”) newspaper.

In preparation for the new Star Wars film my wife, the lovely and cinematically on the ball, Dawn, and I spent last weekend watching all of the Star Wars movies in their correct timeline – according to George Lucas, and not in the order of theatrical release. I’m still lost trying to follow that.

The second half of this somewhat serendipitous collision came about because I read the Sunday paper. Part of our Sunday paper includes the magazine insert “Parade.” It has shrunk over time until it is little more than a pamphlet.

In the “Parade” was a helpful “article” about new Star Wars related Christmas gifts that are available in stores and online. I have included pictures of the ads just so you won’t think I made this stuff up. I’m not that creative.

Dawn’s favorite was the “CoverGirl’s new Star Wars Limited Edition” lipstick, nail polish and mascara. For $8 – $9 you can answer their question, “Dark side or Light side?”  For just a few bucks you too can look like you came from another galaxy!

My personal favorite gift idea are the “Super Sabers” Barbecue Tongs. Designed to look like the nifty light sabers, used by far too many beings in the movies, the tongs, according to the Parade ad copywriters, insist that “Grillmasters will enjoy turning meat to the dark side…”

That I find a bit spooky and not at all likely to make me a buyer.

I kind of like the “Traitor Toaster” as well. I can just picture myself getting up each day and dropping a couple of Pop Tarts into Darth Vader’s head. Positively Yoda-licious!

We don’t have any pets or I would be sorely tempted to order a few of the Chewbacca or Jabba doggie toys. I wouldn’t give them to a cat because there would be some serious furballs coming up as Chewbacca was ripped into bite-size pieces. One must consider these things if you are to be a responsible pet owner.

As I looked over the selection of these Star Wars related Christmas gifts two things crossed my mind:

Somebody actually got paid to write this stuff – perhaps the worst ad copy I’ve ever seen.

If these are the best product ideas they could come up with – what did they reject? “Death Star Skin Cream” – “Princess Leia Cinnamon Buns” – “Chewbacca Spittoons” 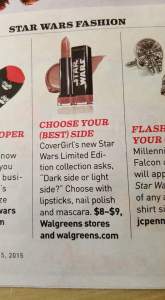 Well, that’s how I spent my weekend – a combination of entertainment and profound confusion.

I will now await the next George Lucas Epic which is due in December I’m told. This film will be the first film in the third part of the nine film trilogy. I still haven’t quite got my mind wrapped around that yet. Maybe there will be an article in the Sunday paper that will help me with that.

Until then, “May the Force be with you” and “Don’t text while driving” – especially at light speed.