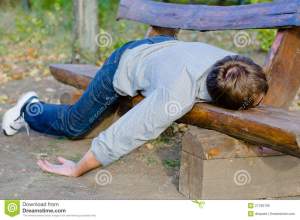 THIS PAST WEEKEND WAS HOMECOMING for the Students and Alumni of Indiana State University here in Terre Haute. (That’s French for, “I can’t feel my face.”)

The town was filled to overflowing with grads coming in from all over the country to revisit a burgeoning campus and attend the Big Game. There is always a Big Game for Homecoming. It must be a law or something.

There is another event that has, by tradition, become part of the Homecoming festivities every year – The Pub Crawl.

The Pub Crawl, renamed by the University as “The Walk” in an attempt to make it sound not so vomitorious, has hundreds of ISU students, and opportunistic alcoholics, lurching from bar to bar along a route from the Main Campus along Wabash Avenue out to the football stadium for the Big Game.

By the time the survivors get to the stadiums they have reached a state of inebriation last achieved by the U.S. Navy the day that Japan surrendered in 1945 ending World War Two.

The “Walk” covers little more than a mile, about a dozen “Pubs” and several billion no longer functioning liver cells. The City finally wised up and placed about fifteen Porta-Pottys along the route to help contain the Upchuck into spots easily disposed of and not on people’s front yards and doorways.

Since the bulk of the Walkers, by this time turned into Crawlers, are Freshmen at the University, (the upper-class members having decided that they don’t want to feel that bad ever again.) older and wiser students mix in with the drinkers to help keep them from hurting themselves or grossing out the Townies. It worked. This year there were no arrests for anything dangerous. I’m not going to count the shooting at an “After Party” that left one 19 year-old dead and two others in jail. Those boys just get so frisky after their 57th beer, don’t they now?

I stopped in at St. Arbucks the morning after to say a prayer for all the dead Livers and to get a damage report. I was told that this Pub Crawl was a definite improvement over recent years. The Manager told me that the drunks this year were mainly just obnoxious and not destructive. She was referring to an incident two years ago when one young student ripped the sink out of the Men’s Room wall in a fit of incoherence. She also told me that, on an ordinary day, they clean the restrooms once a day, but this year that had to be changed to once every thirty minutes. It seemed that America’s Future had trouble hitting the toilet bowl. Just use your imagination.

In a Master Stroke of Planning my wife, the lovely and pretty darned clever, Dawn, and I were out of town for the day. We live just a beer cans throw from the stadium and it can get noisy and the streets do become impassable.

I think that next year we should plan another short out-of-town trip for Homecoming.

By the way – ISU won the Big Game over somebody, so everyone was in a good mood as they fought the curvature of the earth to make the return trip to the Campus. My guess is that Sunday Morning was the quietest day of the year in the dorms.