It’s Gonna Be A Busy Week 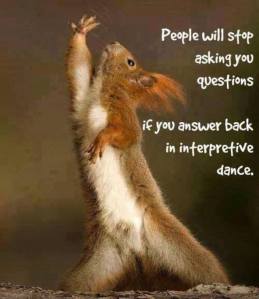 I JUST LOOKED AT MY CALENDAR for next week.

Thursday: Try to be creative. Pull hair out.

It is weeks like the one coming up that make me consider changing my name, claiming to be an injured Interpretive Dancer and apply to go on disability. It’s worth a shot.

I see those first three days as essentially the same.

Monday is like going to the Doctor complaining that my car hurts and my fluids need attention. I will not have to fill up the paper cup, but I will give them six quarts anyway.

Tuesday is going to the Doctor and listening to him complain that both my blood pressure and my weight are too high. This is not news. Then he will ask me if my wife, the lovely and Loyal Giants Gamer Babe, Dawn, and I are going on vacation soon. Experience has taught me that, no matter what I tell him, he will answer with, “I’ve been there.” This time I plan to ambush him by saying that we are going scuba diving in the Gobi Desert. If he says, “I’ve been there,” I may set a new in-office record for blood pressure spikes. He is from India and has spent most of his life travelling. That is what he says. I hope that is true and not that he has been driven from country to country one step ahead of the law.

“Stony Lonesome? I’ve been there.”

Wednesday has me going to a different Doctor. This one is a Nutritionist. He is also from India, but apparently has never been anywhere other than India and the fourth floor of the Medical Building.

He and I have met several times to discus diets and exercise. Well, to be truthful, I discuss the diets and he discusses the exercise part. We can’t seem to come to an agreement on that. I tell him that I am watching what I eat and I have lost over 50 lbs. He proposes programs of exercise for me to adopt and I tell him that the only way that will happen is at gunpoint. He doesn’t seem to understand that, for me, getting up and crossing the room entails planning and combining objectives so I don’t have to make a second trip.

I can see that this frustrates him, so I tell him to relax – he doesn’t want his blood pressure to shoot up or he might have to go see my other Doctor who would ask him about his vacation plans.

While Doctor Number One likes to talk about vacations, Doctor Number Two wants to chat about comedians. The first time I saw him he told me all about his favorite comedians. His tastes differ greatly from mine. He may be an educated man with a lovely accent, but he gets his kicks from some of the biggest potty-mouthed comedians on the planet. Go figure. I asked him if he had ever gone to any of the comedy clubs in LA.

He replied, “I’ve been there.”

It must be an Indian thing.

Going to see any Doctor is a stressful event. You and I know that and so do the Doctors. They call it the “White Coat Effect.” When we see the Doctors in their ubiquitous white lab coats our blood pressure goes up. I think it is part of the old “Fight or Flight” response. Am I going to stay and punch out the Doctor if he tells me, “I’ve been there,” one more time or am I going to turn around, walk out and go get a cuppa and write about it?

The decision is still out on that one.