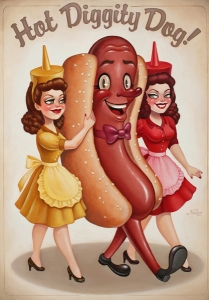 IT WAS A CLOSE CALL. For a while there I didn’t think we were going to make it.

It was about 2:30 in the afternoon when it dawned on me – it was July 4th and we had no hot dogs in the house! How could we have let this happen? No hot dogs on July 4th? Why, it’s almost sacrilegious!

What to do? Where to go? At this late time of day on the 4th itself my chances of finding any hot dogs AND the buns that were an obligatory go-with would be somewhere between slim and none. But I had to try.

Here we were in Terre Haute, Indiana (That’s French for “Tofu is not acceptable.”), in the veritable Heartland of America. If our friends and neighbors heard about this we could be “shunned,” moved to the outer ranks of society and treated as if we were covered with cooties.

Something had to be done – and quickly!

I found the car keys, put on an old baseball cap so nobody would recognize me, and kissed my wife, the lovely and trembling with antici — (wait for it) — pation Dawn, and headed out in search of the elusive hot dog.

My first stop would be the local Kroger’s Supermarket. It was close by and making a valiant effort to stay competitive as newer and bigger Super Stores were opening nearby.

As I approached the Kroger’s parking lot I could see that it was packed – more than packed. It looked like the place had been taken over by a used car dealer. My heart sank a little lower.

I cruised up and down the rows of the parking lot until I saw someone pull out of a gimp spot. I slipped the Toyota into the space, appropriated a cart that was able to do more than just turn left, and I limped my way toward the front doors.

When I entered the store my first thought was that the place was crowded enough to pass for “Free Beer Night” at a Zac Brown concert. It was so jammed with people I would have had to step outside to change my mind.

I figured my best bet was to head to the back of the store to see if there was anything resembling hot dogs left on the shelf. I needed to get there as quickly as possible so I decided to take a shortcut up the dog and cat food aisle. Nobody ever goes there in this town – the dogs eat table scraps and the cats catch their own in the back yard.

It was a good choice of route. I made it to the back of the store in a flash – directly in front of the hot dog, lunch meat, and braunschweiger display.

It was like finding the “Lost Dutchman Mine” on your first day in town. They must have cleaned out every hot dog production line in Mid-America. There were hundreds of packages piled up, glistening with the sweat of other desperate husbands. I worked my way through the crowd and snatched a fistful of “Ball Park All Beef” hot dogs.

Nobody at Lourdes ever had a miracle like that. But that was only half the battle.

A deftly executed U-turn headed me to the bread/donut/bagel section.

I have a newfound respect for the buyers at Kroger’s.

When I got there I saw a mountain of hot dog buns that rivaled the Matterhorn at Disneyland. A quick deke to the left and feint to the right and the pack of buns was sitting in my cart, already snuggling up to the dogs.

When I got home my dearest Dawn was waiting with a smile on her face and the news that we were going out for dinner with some friends who had just come into town. My Noble Quest – The Impossible Dream – My All Beef Holy Grail was going to have to wait until tomorrow.

Hot dogs on the 5th of July.

Sometimes I just want to cry.