Someone, Call Greenpeace for Me 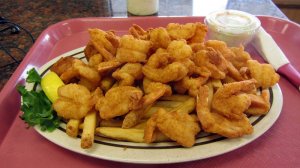 I WENT OUT TO DINNER LAST NIGHT with a half dozen other people. We ended up at the Red Lobster – and now I need help. I feel like a beached whale.

When I went in there I had all the intentions in the world of getting only a bowl of chowder and a salad. After all, I am trying to lose weight. Instead I scarfed down enough fried shrimp to keep a fleet of shrimp boats in business for a year. It wasn’t just the ton and a half of shrimp of course. There was also the baked potato and the salad and the biscuits – oh yeah, and the fried mozzarella cheese sticks.

They say that seafood is a more healthy way to eat. I don’t think that a Search and Destroy mission through the 21 page menu at Red Lobster is what they had in mind.

And the thing is: I really don’t like the Red Lobster, but whenever I’m in there I eat like I’m preparing for an extended hunger strike in some third world prison.

This kind of starvation mode binging doesn’t happen to me in other restaurants. I can walk into a Five Guys burger joint, where gorging to the point of potential explosion is a real possibility, and I am more than happy to share and even leave a hefty portion behind and walk out the door. At Red Lobster though, it is a case of any breaded scrap left behind is sacrilege.

While we were on vacation I was actually pretty good about not eating like the horde of locusts that swarmed over Brigham Young and followers. Fortunately I didn’t have to make extra notches in my belt or suddenly become trailer park stylish in yoga pants. I think I may have lost a pound or two. Of course slogging through a weeks worth of 114 degree days might have helped.

Yeah, well so is a blast furnace.

Between now, this moment, until July 20th I promise to be good and be very selective about what I shovel down my pie hole. On July 20th we are off to Texas for the annual Family Get Together and Sweat Fest. It will be hot and muggy as well (NOT a dry heat).

While in Texas I know that there will some occasions when I will be one member of a “Party of Seventeen” going out to eat. One of those outings may be to the Red Lobster. I’ve already started a program of meditation to prevent a repeat of last night.

Here in Terre Haute (That’s French for “More, More, I’m still not satisfied) that Red Lobster is the most successful restaurant in town. The only real reason I can think of for that being so is that they must be lacing their shrimp batter with hallucinogens.

That isn’t true, I’m sure. I’m just looking for an excuse that gets me off the hook for my own behavior.

I swear on the soul of Lloyd Bridges that when I go into the Red Lobster in Texas I will muster all of my will power and eat sensibly. Sensibly means that I will order a Caesar Salad, not eat the half pound of croutons they toss on top of it, and I will NOT devour the entire catch of the Gulf Shrimping Fleet.

I think I’ll go check the number of notches in my belts so I can pick the one with the most room.

2 thoughts on “Someone, Call Greenpeace for Me”