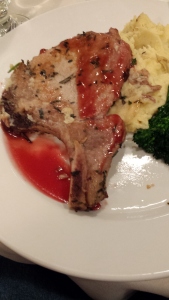 ONE OF THE PROBLEMS with attending a conference in a large hotel is the food. When they are trying to feed lunch or dinner to hundreds of people at a time it can get problematic almost instantaneously.

Trying to figure out a menu that people will enjoy, without accidentally poisoning a few or having Table 43 slip into anaphylactic shock from gluten sensitivity, can be a culinary nightmare.

While we were in Salt Lake City the fine folks at the Sheraton tried their best. They put together a menu that was, at once, both non-toxic, yet boring as an Al and Tipper Gore docu-drama.

Every lunch was chicken – the same chicken. I swear DNA testing could prove the things on each plate were all clones from the same original chicken.

“Why did the chicken cross the road?”

“To get to the freezer at the Sheraton in Salt Lake.”

After a few days it became obvious that, no matter how they disguised it with rice, potatoes or pasta, it was going to be the same tough and tasteless chicken. But on the bright side, I saw no one keel over or begin to look comatose. I’m not counting the few that just seemed to nod off and take a nap before the salads were delivered. I came close to that myself.

The 6 PM sharp dinner feed showed more flair. I suspect someone else created that menu and they let the chickens go “Free-Range.”

The first night was salmon. That surprised me because some people are allergic to salmon. I’m not. I didn’t believe they would serve salmon and risk having people burst into flames or whatever.

I was pleased. I was afraid it was going to be another chicken disguised as something else. I tasted it very tentatively because it was the same color as the chicken. I don’t know how they could do that short of a tanning salon. I know it was salmon because chicken doesn’t have the same texture and pattern. However, it did taste like the chicken – that is, not at all.

The rice and asparagus that surrounded the fish tasted like a very nice white and wild rice mix. I enjoyed that.

The next night the dinnertime entrée was fish again. This time it was your generic white fish. I don’t know if it was actually Whitefish or just some other fish that was white.

When I saw that it was fish for a second evening I began to fear that we were in for the same kind of ride that we were having at lunch. Was dinner going to be another version of “Guess The Entrée?”

For some reason, known but to God and the wholesale fishmonger, this fish actually tasted like fish and not the Robo-Chicken from lunch.

Lunch on day three: one guess.

The next night my wife, the lovely and always displaying good taste, Dawn, and I dined with a smaller group of attendees instead of the cast of thousands like before.

There was not a chicken or a fish in sight. The entrée was – drumroll please – pork – or at least that was the consensus opinion. That is a picture of it up above.

Our table mates were oohing and ahhhing along with us. I picked up my knife and I began to carve off a bite when it dawned on me. I stopped and asked Dawn if she saw what I saw.

As I looked at it I noticed that it was a little askew, like there had been an earthquake.  I realized that it looked like that because my knife had made a serious cut into Paraguay.

I’ve always liked Continental food so I took another long look at it trying to decide where to journey next.