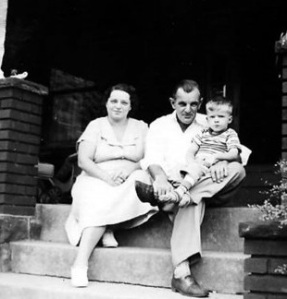 THE FATHERS DAY Holiday, Celebration, Acknowledgement is hard upon us.

On days like that I really don’t think much about my role as a father. I picked up the honorific in midstream, becoming a “Step-Dad” at the age of 56. I don’t think about my role because it is an evolving thing, changing from day to day – sometimes hour to hour.

One thing I really try to avoid is judging myself. That is for others to do. I’m winging it and, like a physician, my first thoughts are “to do no harm.”

What do crawl through my mind when Fathers Day comes around are my memories of my father and his life and experiences.

Let me ramble on this for a while.

My father was born in 1911 and came of age in the plummet of the Great Depression. He graduated high school in 1930 with a promising future.

In that era we humans were smaller and football players were miniscule compared to what trundles down the field today. My father was a 180# lineman on the high school team. His father was supportive of him playing, but his mother was not. The solution? My father played under an assumed name and his mother never knew until his senior year when college football scouts began calling.

In 1930 when the world was in economic chaos, my father was offered a full scholarship to the University of North Carolina. It was “full,” covering tuition, books, housing and meals. The only thing it didn’t cover was transportation to North Carolina.

His dream of a college education was blasted out of the water because his family couldn’t come up with the cost of a bus or train ticket.

I cannot imagine what he must have felt – the disappointment, the anger to be sure and the sense of…of… I don’t know what else.

He never told me about this until he was ill and dying, but you know that he must have thought of it frequently over the years, especially in his last days.

When his sky fell he went to work. He worked next to his father as a barber, then into the steel mills, and into construction as a roofer until he could no longer physically carry on.

I’ve outlived them both now.

That is him in the picture above, with my mother and a three year old me, circa 1949.

I became the first person in our family to ever graduate from college.

So, as Fathers Day spreads itself across our commercial landscape I don’t think of my status. I know that I’ll get a card from Alex and that moves me more than I ever expect.

With all of the hoopla surrounding days like Fathers Day I find it a time best spent quietly, reflecting on another man who has been gone for more than half of my life. I wonder what might have been for him if the times had been better and the cost of a ticket had been found.