A Bad Day For Bambi 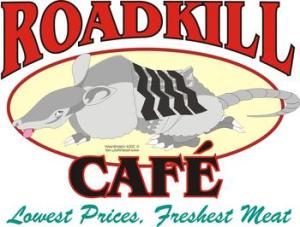 A FEW DAYS AGO I and my wife, the ever popular and talented Dawn, drove from Terre Haute (That’s French for “We Need Another Starbucks”) up to the metropolis of Olivet, Michigan. Usually it is a long, boring drive, but the trip on this occasion had a wrinkle that helped keep us alert.

Remember when you were a kid? You would pass the time on long road trips to Grandma’s house or wherever by playing games like, “Spot the cars with out of state license plates,” or “I see a VW” – and then punch your sister in the arm. Ahhh, such fond memories.

On this trip we played “Count the Roadkill.”

Around Terre Haute (That’s French for “Another dead squirrel”) the roadkill opportunities run the gamut from A to B. It is either squirrels or opossums. Seeing a dead dog or cat is a rare event, although I did kill two squabbling birds one time. That really left an ugly mess on the front of my Hyundai.

On our trip up north the menu selections were wider and more prolific. There was a dead raccoon every ten yards it seemed. Dogs that made bad choices showed up a few times as well, but the Grand Prize Winner on this trip was Deer.

On Interstate 69 from Indianapolis up to the Michigan state line – “Welcome to Pure Michigan,” (That is what the welcoming signs say – “Pure” Michigan, complete with the italics. Dawn guessed that “Impure” Michigan was closer to Detroit.) – We counted TEN deceased deer either by the side of the road, or on a couple of occasions, still jutting out into traffic. Not pretty at all. Their eyes were still open, like their last thought was, “What the heck was tha…?”

I’m not talking little spotted fawns here or things that look like lawn ornaments in tacky gated community neighborhoods, no, I’m saying really big animals. Meat on the cloven hoof big. We didn’t stop to do any autopsies or weigh them, but these critters looked to be of sufficient bulk to make a serious dent in both your vehicle and your bodily functions if you collided.

Ten dead deer on a stretch of highway about 185 miles long. That’s not just a coincidence that is a trend. To be a deer along that road is tantamount to a suicide pact.

At one point we saw three of them flattened within less than a quarter mile stretch of the Interstate. I’m thinking that the whole family decided to cross the road at the same very bad time.

One point of curiosity – once we crossed into “Pure” Michigan we saw no more dead deer. The carnage stopped. We surmised that, either “Pure” Michigan has a large team of people who endlessly cruise the state’s roads scooping up the carcasses left behind by drivers, or all of the deer there are already dead. I vote for the Stateline Extinction Theory. A crew of Animal Scoopers sufficiently large enough would bloat the state’s Civil Service roles.

But, then again, this was Michigan, so, the issue remains open for discussion.

Maybe getting rid of all the dead animals is their way of justifying adding “Pure” to the road signs. That does read better than “Welcome to “Decaying and Bloated Roadkill” Michigan. At least I think so, but I’m no expert on such things.

This sure beat the heck out of playing “Spot the VW,” at least for us. I’m not so sure that the deer enjoyed it at all.