Now THAT Was A Surprise Party! 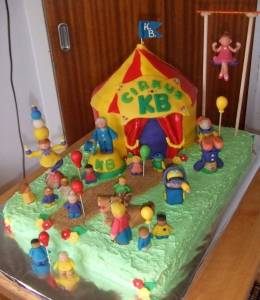 WHEN “THE USUAL SUSPECTS” – aka the clowns slouched in the corner at St. Arbucks most mornings, plan an event you know it is going to be special.

Friday morning was supposed to be a surprise party for one of the baristas who was moving on and up. Yesterday, our Trapeze Artist/College Student/Barista had her last scheduled shift. After that she was moving up to Indy with her Main Squeeze and to spend the summer working with a circus. We saw it as our duty to give her a send-off she wouldn’t forget.

We had ordered a cake from the Kroger, decorated with a miniature plastic circus motif spread across the frosting. The Manager loved the idea and it was to be an early morning gala. The St. Arbucks Tabernacle Choir was going to regale us with prerecorded Muzak. One of the Suspects even offered to perform an interpretive dance. We made sure he took his meds and the offer was withdrawn.

When I suggested that the scene on the cake have one little plastic performer face down in the frosting underneath the tiny trapeze, the lady at the Kroger bakery thought that was in bad taste. She also didn’t like my idea to have her spell out “OOPS!” on the cake.

The party was going to start about 8AM. Any earlier would have seemed awkward, and the cake wasn’t going to be ready until then anyway.

The Guest of Honor was scheduled to open the joint at 6:00 AM – but – she forgot. When other employees showed up the place was still dark. Phone calls to her number went unanswered. We had nobody to Bon on their Voyage.

When the Revelers began to arrive a little before 8:00 everything was on hold. When our Party Planner went to pick up the cake, it wasn’t ready. The bakery staff thought that we wanted it at 7:30 PM even though the receipt clearly said AM. They kicked into overdrive and said they would have it in a half hour.

This whole thing was falling apart.

We never have heard from our No-Show Espresso Defector. Maybe we should have told her about the party. Of course, knowing who was behind it all might have gotten the same results. She is willing to risk her life on the high trapeze, but asking her to eat a piece of cake that we hand her might have crossed the line. Can’t really blame her there. This crew makes me nervous sometimes.

I’m willing to forgive and forget.

I’m just glad we decided against renting the Alpacas to add a more “Circus-y” atmosphere. The Manager vetoed that idea – and the unicyclist – and the trained seals. She’s had bad experiences with Craig’s List she said.

We were only trying to help.

Because this whole thing seemed doomed from the start we took the only step that seemed to make sense in the end.

We stiffed Kroger on the cake.