The Worst I’ve Ever Seen 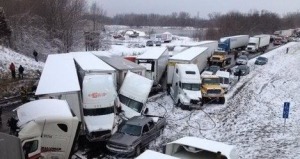 LAST WEEK WE HAD TO DRIVE from Terre Haute (That’s French for “The gas is the pedal on the right, Dummy.”), up into western Michigan. It wasn’t a bad drive except for the area in and around Indianapolis.

I have driven in major urban areas for years, ranging from New York City, Washington DC and Los Angeles to Boston and San Francisco and I have never seen worse drivers than those in Indianapolis.

And that is saying somethin’!

In New York it is so congested the traffic doesn’t move. DC is filled with foreign drivers and they are all driving by Bangladeshi traffic laws or something. In LA they drive and reload at the same time. In Boston: see New York City. San Francisco seems to regard traffic laws as mere suggestions. But in Indy all bets are off. It reminds me of the Roman chariot race scene in Ben-Hur.

When driving in Indianapolis you should remember that lane markings are strictly decorative, turn signals are nonexistent and speed limits are set by the laws of physics. Combine these three things and you have chaos.

So what if you are in the left lane and you want to get off at that exit a hundred feet ahead – just slam on the brakes (with burned out brake lights) and cut across all four lanes. So what if you are driving a dump truck with bad shock absorbers, overloaded with loose scrap iron? Keep changing lanes until you find one you like. So what if you are conducting a conference call on you cell phone while on the Interstate? It’s a private call.

I have come to the conclusion that Interstate 465, the beltway loop around the city has, without my knowledge, been reserved for people who have never driven a car before. Remember the bumper cars at the amusement parks when you were a kid? Welcome to Indianapolis.

I must admit that a contributing factor to this chaotic situation is the abysmal condition of the roadway itself. Potholes? No, it goes beyond potholes. There are places when slabs of road are simply – missing. It requires constant swerving to avoid sections of AWOL concrete big enough to warrant guided donkey tours.

The portion of the trip from home until we hit Indy, and from when we left Indy behind all the way to Michigan was fine, but inside the “Indy Metro Area” was like trying to drive inside a giant Pachinko Machine. Driving through Chicago is a pleasure trip by comparison.

I’m wondering if Indy also being the home to the Indy 500 Auto Race might be a contributing factor. Do these numbskulls driving around Indianapolis think that having that famous racing event there gives them some special skills behind the wheel through osmosis? Clue: It doesn’t. When the famous professional race drivers come to Indy I think they head to the track because it’s the safest place in town to drive. Even at 200MPH they are in less danger at the Brickyard than just driving back to their hotels in the city.

On the whole I like Indianapolis. It is a good theater town, with great sports teams and wonderful museums, but when it comes to how those people drive – “Jesus wept.”

It is like being strapped to a spinning target in a knife throwing act and learning that the person tossing the blades is as blind as a Major League Baseball Umpire – with a drug habit – and gambling debts – with high blood pressure and a cheese Danish in his mouth – in the rain – at night.

One thought on “The Worst I’ve Ever Seen”