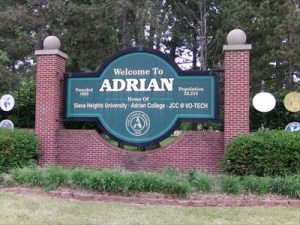 FOR THE LAST FEW DAY we have been in Adrian, Michigan. It is a small college town just across the state line from Ohio, about 300 miles from Terre Haute (That’s French for “What? Another train?).

We are here for an annual Convocation Meeting of ministers, my wife, the lovely and wicked funny Dawn, being one of them.

My function in this event is to be Arm Candy (Don’t laugh!) and to not get into any trouble. While we are here I think that there will also be a Commissioner’s Meeting of our Fantasy Baseball League. All of the teams are “managed” by ministers – except for my team (The Pismo Beachcombers). The fact that I am the only non-clergy in the league may, and I stress may, have something to do with the fact that my team is in last place. It is hard to beat “Connections.”

Adrian is a very picturesque little town. There are a couple of small colleges here that date back to the 1830s. For such a small town it is refreshing to see that their downtown seems to be flourishing even though there is that ubiquitous strip on the edge of town with all of the big chain stores and restaurants.

The Convocation Meeting, while it is of Protestant ministers, is being held at a facility run by Catholic nuns. I’d say that’s rather big of them.

I went to Catholic grade school for eight years. I know nuns. The Order that ran my school was the Little Sisters of the Right Cross. They all had a Black Belt in Theology. There was no nonsense in that place. What would you expect when you had a Principal called Sister Mary Butch?

Since I have no real function here I have been exploring a bit. I found the local Chapel of St. Arbucks and contrary to the one I visited recently in Bloomington, Indiana, the folks working here in Adrian were smiling, cheerful and welcoming. I have been in there each day and have never seen a grumpy face, except mine when my phone acted up and wouldn’t open up my email.

When I first drove through town I saw something that brought back fond memories of days gone by – There is Big Boy Restaurant in this town, complete with the plastic statue of Big Boy out front. The last time I was in a Big Boy was in the early 1990s. There was a Big Boy across the street from the NBC Burbank Studios. That one is closed now. I don’t think that there are many of them left. First it was the Panama Canal, now its Big Boy. I just wish I had the chance to go to the Adrian Big Boy, but that ain’t gonna happen. My Arm Candy obligations require my charm, wit, and physical presence elsewhere.

One never knows if I shall pass this way again.

Adrian, Oh, Adrian! I call out to you to keep your small town beauty. Stay true to your heritage as an old fashion college town with green lawns, Victorian homes and deep fried mushrooms at the Big Boy.