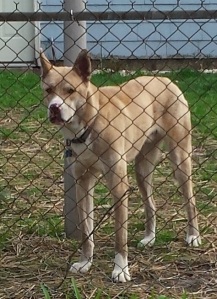 We live in town: Terre Haute (That’s French for “City of Big Dogs”), Indiana. We do not live out in the sticks, the boonies, the tules, the woods, or even the ‘burbs. That hasn’t seemed to sink in with the Animal Kingdom around here.

IN OUR YARD I have encountered raccoons, opossum, rabbits, deer, redtail hawks, and something which left racks in the snow that I suspect may have been either a Yeti or Pablo Sandoval of the Boston Red Sox.

Those critters I have seen with my own two bleary eyes. There have been reliable reports of coyotes (I can hear them at night serenading the moon) and mountain lions. Knowing that they are in the ‘hood makes taking out the trash at night into a bit of an adventure – move quickly; look for eyes shining in the dark; do not carry meat in your wallet.

I’m not counting the miscellaneous dogs and cat that pass through on their way to wherever. Neighbors on three sides of us have pet dogs. They (the dogs) spend most of their time barking at each other or staring at me as I limp to and from the car (“Look, he’s wounded. I could take him.”).

Right next door, separated from us by only the suggestion of a real fence, are two dogs, Zoe and Zeus – obviously named by the kids. Some days they make me want to rent a coyote.

Zoe is a small dog of questionable ancestry who obviously thinks that I am Satan incarnate. Zoe will bark at me until she is ready to hyperventilate every time I come through the back door. This has been going on for several years now. Zoe is either the world’s best watch dog, incredibly nearsighted, or just dumb as a sackful of yo-yos. I’m voting for the yo-yos on this one.

Zeus on the other hand is a LARGE dog. His family tree is part Great Dane, part Malamute, and part Buick. Thanks be to God that Zeus is a gentle soul. The only time I’ve seen him express any anger is when Zoe finally gets on his last nerve and he, literally, slaps her upside the head to shut her up. Good dog!

Zeus is not a noisy dog at all. I have rarely heard him bark, but when he does every other animal in the neighborhood stops to listen. With that baritone voice he could easily sing the role of Iago in Verdi’s “Otello.”

What is truly entertaining is Zeus’ reaction whenever a cop car or fire truck roars past with sirens screaming. That pup can howl with the best of them. We can hear him clearly from inside our house even though he is inside his house. Those folks have got to just LOVE that at three in the morning.

Zeus’ humans are in the process of erecting an 8 foot high fence around their yard – as if that is going to keep Zeus from going for a walk through the neighborhood. I’ve seen him go over the current four-footer like he was stepping off the curb; the bigger fence may require him to take a running start, but….

Given the wildlife that passes through our yard, having Zeus next door is comforting. He is sort of an animal equivalent to a United States Marines Unit, heavily armed. Even a mountain lion would look at Zeus and think, “Eh – maybe the next block over.”

The picture up at the top is the One and Only Zeus. I tried to get a shot of Zoe, but she saw me raise my camera and ran for cover (that little barking football).