I Gotta Get Some Rest 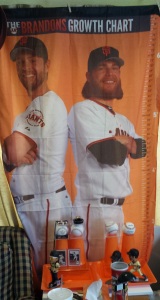 Ever since early November I’ve been getting a good six to eight hours of sleep a day. Now that is all shot to pieces. Baseball season has started.

I can see you scratching your head and saying to yourself, “What the heck is this idiot blathering about now?” Don’t deny it. I know that is what I would be doing if the blog was on the other foot. Let me explain.

My wife (The Rev. aka Dawn) and I are fans of the San Francisco Giants and we live in Terre Haute (That’s French for “Eastern Time Zone), Indiana. We are loyal fans who try to tune into every Giants game that we can. The only fly in this ointment is that when the Giants are playing on the West Coast, which is about 70% of the time, the games do not start until 10 PM our time. Ergo – it is not unusual for us to be watching the Giants play until 2 AM.

Back in “The Old Days” when I was out in some club until 2:30 AM, I could survive on coffee and adrenaline and be able to show up for the dreaded “Day Job” at 8 AM. Yeah. Well, that was then and this is now and I’m lucky if I don’t nod off before the local news comes on.

Like the players on the field we have had to go to our own version of Spring Training. Starting in early February we started some serious binge-watching on Netflix, staying up later and later, trying to get in shape for the regular season, which started last week. We jogged along with “House of Cards,” stretched our muscles with “White Collar,” and pumped “True Detectives.” What a workout!

This year the Giants are starting the season on the road with games in Arizona, San Diego and LA before going home to San Francisco. Fourteen straight days in the Pacific Time Zone.

We are tired already and the season has barely begun, but we are from hardy stock and will not capitulate and fall back into watching the replay the next day.

I do have to admit that part of the problem is our seating. At game time we are both firmly ensconced in what are known as “The Rip Van Winkle Memorial Chairs.” If the laws were tougher in Indiana these chairs might be considered “Controlled Substances.”  I plop down and within five minutes I need to start pinching myself to stay awake.

I suppose that we could use caffeine to help us stay awake, but my doctor is already on my butt to cut back on that.

Watching a Giants game entails more than just sitting there. Certain clothing must be worn, certain foods must be consumed, and proper homage must be afforded at the Giants Shrine. That is a picture of it up at the top of this post. I know- you are now either shaking your head in disbelief, laughing at us, or looking up the phone number of the Terre Haute Mental Health Agency. Don’t bother. We have them on speed-dial.

Last Thursday the Giants game started at 6:40 PM and we thought that it might give us a break and an early evening. No such luck. The game went 12 innings. We won, and that is really the most important thing, but any thoughts of getting to bed before the Tonight Show came on were effectively squelched.

Sometimes you just have to take one for the team.