Coffee Without A Net 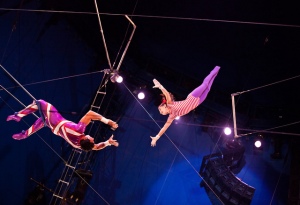 HAVING MORE THAN ONE SKILL is a good thing. Having more than one skill that can earn you some money is even better – and much rarer.

This morning I made a short pilgrimage to the Chapel at St. Arbucks to say a prayer or two of thanks for the warmer weather and to get a bagel. Feed the soul and feed the body I always say. Nobody ever listens when I say it, but I do it anyway.

As I was saying before I so rudely interrupted myself — Having multiple skills is a good thing and I learned today that one of the acolytes (baristas) at St. Arbucks has a most unique second skill.

When I arrived at the Chapel there was a lively conversation going on with several of The Usual Suspects who are in there every day and one young lady who can already whip up your coffee, take an order from a drive-thru customer and smile – all at the same time.

Listening in on this conversation I learned that the barista was also a student at Indiana State University here in Terre Haute (That’s French for “Larry Bird went to school here.”). She was going for a degree in Law Enforcement with a goal of joining the FBI. Ambitious, no?

As she continued talking I learned that she also had a unique, yet marketable, skill that she was going to engage in later this month. Calling upon years of practical experience she claimed, she was going to be performing with a circus – as a trapeze artist.

I have to admit that, if given the opportunity to have three guesses, I would not have said, “You will be flying on the high trapeze.” I might have guessed being shot out of a cannon or even starting Center for the Indiana Pacers NBA team before I would have gotten around to flying through the air with the greatest of ease. Even though I am easily impressed, her words really stopped me in mid-sip.

She said that she started “Flying,” as she called it, when she was seven years old. Sweet Jesus! When I was seven I couldn’t even cross the street by myself.

I can’t imagine how one decides to get into that line of work. I don’t know of any institution of “higher” learning that one can attend. “I was a trapeze major with a minor in sword swallowing.” I never saw any questions on the SAT Exam that might have uncovered a hidden aptitude for that sort of thing.

Perhaps it was the family business. “Now presenting, in the Center Ring – ‘The Flying Baristas’!”  I need to make further inquiries on this.

I asked her if there was a net involved in this act. “A small one,” she answered. I would want – no, I would insist on the largest net they could find.

It did occur to me that, just perhaps, this petite young lady was yanking our collective chains – until she showed us a nice selection of photos from her last stint with the circus. “Day-um, she’s not kidding!”

Since her performance is going to be about a three hour drive from here I suggested that we, The Usual Suspects, rent a bus and go to the circus. This was met with a chorus of logic. If we are stopped by the police how rational would our explanation be, telling the State Trooper that we were on our way to watch our barista fly through the air on the high trapeze. We would all be calling home for bail money.

So, it appears that we will have to wait for her to land back at St. Arbucks and show us some pictures. I’m sure they will be more interesting than any pictures we could show her. And anyway, I’m not fond of clowns and I’m sure that there would be clowns there – other than us, that is.